And so he climbed!!

Well actually, this is not the first time for Uzair climbing this gate in our home. Whenever he does so, he diverts my attention towards him by saying: Baba, Look!! 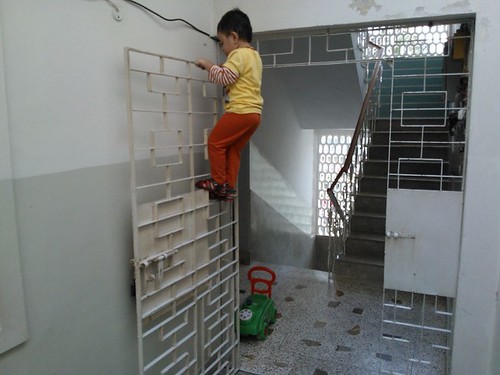 I remember that in his first few attempts, he would always climbed to the top, expecting me to back him up. After getting assured that I’m standing right behind him, he would then release himself from the very top for me to catch him up.

But few tries later, I warned him up not to do so. I then taught him how climb down from there, step by step. But I still stand behind him, just in case.

After all, he is just a kid!

Trying their hands on new things is how kids learn about the most basic things. And letting them do it on their own makes them confident. Of course you can’t just let them do it all by themselves.

Don’t just feed them with a golden spoon! Keep watching them with your lion eyes also!

It’s good for them!!