Samrah, my sister, got married in 2014. Her wedding was really a special moment of my life as she is my only sister and the smallest one. So, she was treated very much like a princess I would say (my sweet princess)

Anyway, as I was saying, her wedding was very special for my whole family as we all enjoyed every bit of it. Pakistani weddings are different than Western weddings in so many ways as we have our own traditions and celebrations that we follow.

One of them is the Mehndi ceremony in which the bride wears a yellow colored dress and elder female family members apply Mehndi on the hands of the bride. Cousins of the bride sings ceremonial songs during the ceremony.

This ceremony took places a day or two before the wedding. In Pakistan, we don’t have the concept of bridesmaids, so either female cousins or female friends of the bride sits besides her during this ceremony.

When Samrah’s Mehndi took place, her cousins participated with full enthusiasm. They sang songs, applied Mehndi and had fun all the way.

I took this picture of them with Samrah on the day of Mehndi. As you can see, all of them have covered their faces with their veils, as per tradition. Samrah is standing second from right. 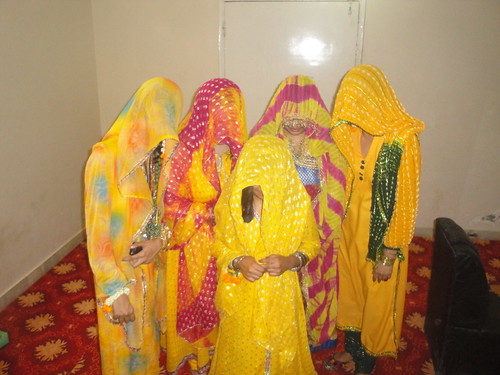 Looking at this photo now reminds me that how much enthusiastic they were back then as they didn’t mind copying the bride.

As if they were ready themselves back to get married. Such innocence!!

Written for The Daily Post’s State of Mind

Added for The Daily Post’s Fashionable