What started up as golden will definitely shine up for so long!

Before boarding our flight to Dubai from Karachi one late night this past January, Uzair (my son) kept on asking me when he will be able to see the airplane. I kept on telling him that he will see it soon.

But unfortunately, that didn’t happened till 2 AM and by then, Uzair was already sleeping. He stayed asleep during the flight mostly and didn’t got the chance to see his big ride which took him from his hometown to a faraway land for the very first time.

But he did manage to see, and even touch, the smaller version of it:) 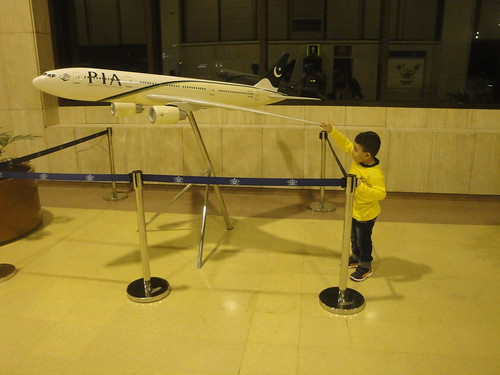 This is the very first snap of our Dubai trip. As we were walking towards the departure lounge, Uzair spotted this model plane and asked me if he could touch it. I said yes, quickly took out my camera and captured this snap of my son, happily touching a model plane.