He is Ready for the lift-off!

Uzair’s fascination with airplanes started during summer nights of 2015 when I used to sit with him in terrace at home. He would always look for those high flying commercial airplanes with tiny blinking lights. Upon finding one or two during those nights, he felt utmost joy, something I can’t explain in words I guess.

As Uzair grew older, that same fascination morphed into owning toy airplanes and riding airplane rides at amusement parks. And last year, when he flew to Dubai from Karachi on his very first air travel, his excitement level reached new heights.

Back in December I took Uzair to an amusement park in Karachi which we didn’t visited before. Among many rides over there, he loved only one ride in that park and you can easily guess which one was it 🙂 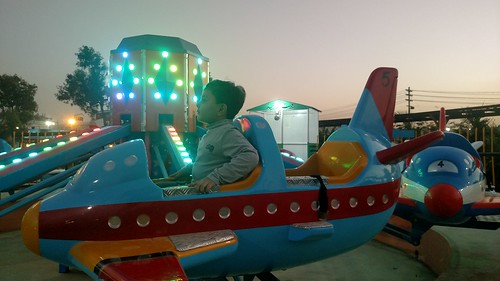 Uzair rode this airplane ride twice and enjoyed it way beyond I can write about it. I took this snap on his second turn, after we toured the whole park. He kept on asking me about let him ride that airplane once again, so I did.

Just before the ride started up and rest of the seats were occupied by others kids in the line, I took this snap of my son, ready to reach the heights of fun and excitement.

But he still loves to see that tiny little airplane in the blackness of night sky and love to point my direction towards it, if I’m nearby.

This is my entry for Cee Neuner’s Fun Foto Challenge: Letter Y – Needs to start or end with the letter Y