Afternoon is a nice part of the day when one can relax up a little to enjoy a nice lunch and looks forward to end a day on a good note.

But for me, the afternoon of this past Monday turned very bizarre.

I was on leave from work on Monday because Uzair was sick. After having my lunch, I was in mood for an afternoon nap because having such luxury on weekdays is a lifetime opportunity for me these days.

My niece, Zainab, returned home from school crying. I, along with my parents and Uzair, went outside to see her. When my father asked her what happened, she pointed towards the sky.

That’s when we saw this: 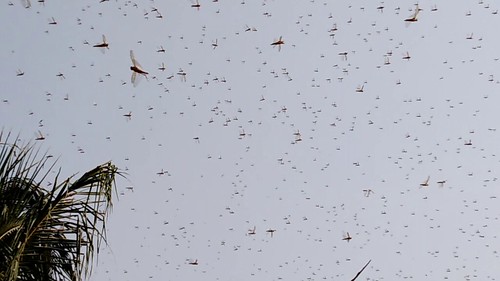 The entire sky was covered up with a gigantic swarm of locusts, who appeared out of nowhere. 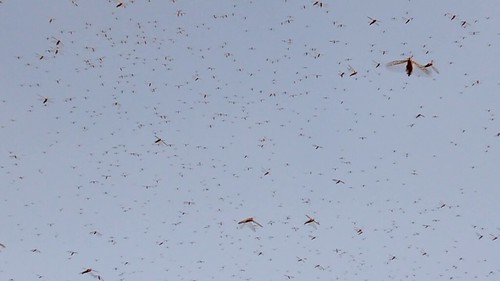 On weekend, I saw news on local TV channels about few areas of Karachi, far away from my home, are under a massive locusts attack. 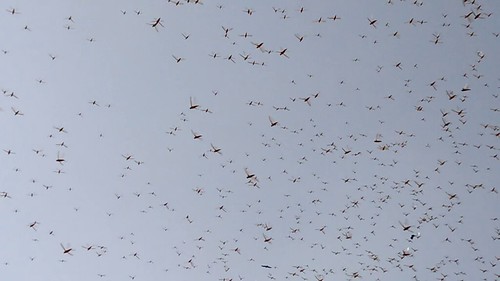 But I wasn’t expecting to see them in my area at all, which was quite an unusual sight.

Luckily, they didn’t wreck much havoc in Karachi but did left the people wondering about their sudden appearance. Some local newspapers claimed that this was the biggest locusts attack in the city since late 60’s.

As I was at home, I grabbed my smartphone and headed towards the rooftop as I took several pictures and even made videos of this rare phenomenon, which I have seen for the first time.

Check out these gifs I’ve made from my videos:

It was truly an unbelievable sight!

For 30 minutes, they were all over the sky. I did spotted several of them sitting on nearby trees but they didn’t seemed hungry as they didn’t ate up in the way they are famous for.

19 thoughts on “Tale Of A Creepy, Spooky Afternoon”